Discussion of Key Themes. The attendees at the Public Consultation raised a number of questions which have, no doubt, given the EBA considerable food for thought. This blog post identifies and explores the key themes of the day. Beyond the key themes identified below, the Public Consultation included discussions of the issues of internal audit, reporting and registration, and supervisory oversight.

Many attendees at the Public Consultation noted that this scope was unduly onerous and would become administratively burdensome for firms to manage. Notably, the broadening of the addressees of the Draft Guidelines In-scope Entitiesto include payment institutions subject to the revised Payment Services Directive PSD2 and electronic money institutions subject to the e-money Directivewas not guidslines in detail at the Public Consultation. However, an attendee raised a question as to the applicability of the Draft Guidelines to industry utilities.

The EBA confirmed they had not yet considered this point outsourcibg advised that they would reflect and clarify the position in the final guidelines. The Draft Guidelines state that intra-group arrangements, as well as third-party outsourcings, must comply with the Draft Guidelines. At the Public Consultation, the EBA confirmed that intra-group arrangements should be subject to the same degree of rigour and risk assessment as third-party arrangements, but noted that this scope was not new and was already a requirement pursuant to Article of Capital Requirements Directive CRD IV.

As many In-scope Entities set about moving key operations out of the UK and to other EU member states, intra-group outsourcing arrangements will become increasingly critical.

In-scope Entities should therefore review the terms of their intra-group agreements and think about their current operational measures and controls to manage intra-group arrangements. The EBA also emphasised the need for a cooperation agreement between relevant competent authorities if the outsourcing service provider is located in a third country see paragraph 26 of the Draft Guidelines.

This raises the obvious question about the need for such an agreement between EU regulators and the FCA post-Brexit; unfortunately, the EBA advised that the status of any work regarding cooperation agreements fell outside of the remit of the Public Consultation.

As a result, both cloud and FinTech featured heavily on the agenda at the Public Consultation. 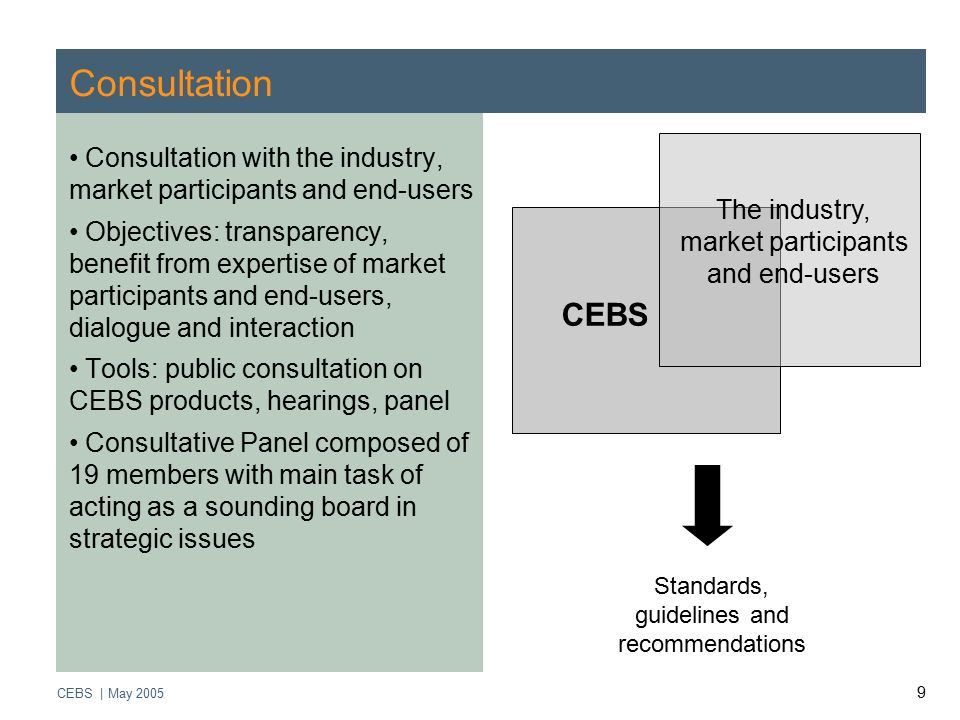 Interestingly the Oytsourcing Guidelines do not address the fact that integrating guidelines means that payment institutions and electronic money institutions will, from the effective date of the Draft Guidelines, be subject to the cloud considerations even though such institutions are not currently in scope of the Cloud Recommendations Addressees.

Certain competent authorities, such as BaFin in Germany, have already confirmed that they will postpone local implementation of the Cloud Recommendations until such time as the recommendations are integrated into the new outsourcing guidelines and, at that time, will comply with the fixed timeline for such guidelines see The Recommendations Compliance Table.

EBA consults on Guidelines on outsourcing

This announcement by the FCA albeit made to very little fanfare was generally welcomed by both UK financial institutions and cloud providers as the announcement relieves them of the burden of complying with two sets of guidance which, though similar, included nuanced differences. Also notably, this FCA announcement was most likely a political nod to European regulators that UK financial services firms are expected to remain compliant with the leading European guidance on outsourcing to the cloud.

Going forward, it will be interesting to see how the FCA responds to the introduction of the outsourcing guidelines and, as a result, repeal of the Cloud Recommendations which are scheduled to come into effect after the UK has guidelinss the EU. If a competent authority considers concentration risk to be too great, then it may order the cessation of such an arrangement.

EBA Consults on Guidelines on Outsourcing in the EU

This approach was challenged at the Public Consultation on the grounds it could lead to operational risk, in particular in connection with cloud outsourcing arrangements. Responding to these concerns Bernd Rummel of the EBA noted that the competent authorities would be in regular dialogue with In-scope Entities and would not exercise such a right without consultation.

That said, the potential systemic risk implications of the use of cloud arrangements is an area of focus for banking regulators and should be monitored going forward.

This requires In-Scope Entities to balance the drive to be innovative and market-leading which appears to be encouraged by the EBA in the FinTech Roadmap with the need to implement robust contractual arrangements and operational processes to manage risk as required by the Draft Guidelines.

Notwithstanding, it seems unlikely that the EBA will make any concessions in the final guidelines for FinTech providers.

In-Scope Entities, therefore, need to start thinking, ahead of the implementation date, about how best to reconcile the desire to engage with start-ups and innovation hubs within a reasonably rigid framework of rules and requirements for third-party contracting.

The Public Consultation consisted of industry bodies, bank representatives, law firms, service providers and industry utilities in deep discussion and questioning the EBA for two hours. It is fair to say that the EBA now has a guidlines amount of homework.

In the Draft Guidelines, the expected timeline for implementation of the new guidelines is 30 June and the grace period for updating existing outsourcing arrangements in line with the new guidelines is 31 December This is a relatively short period of time considering not only the scope of the new guidelines, but also the breadth of change In-scope Entities face in the coming 12 months. One attendee at the Public Consultation requested that the EBA extend the timeline for implementation, but whether the EBA will heed this or any of the recommendations made at the Public Consultation, remains to be outsourcig.

In the meantime, In-scope Entities are advised to take account of the Draft Guidelines in their outsourcing plans and start preparing for the internal changes required if the Draft Guidelines change only minimally before coming into effect. Next Steps The Public Consultation consisted of industry bodies, bank representatives, law firms, service providers and industry utilities in deep discussion and questioning the EBA for two hours.